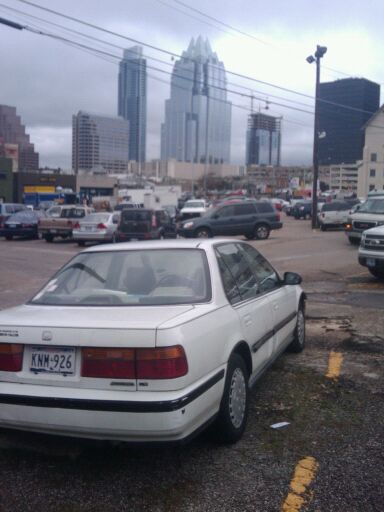 Breaking up is hard.  In a couple of weeks or so my father is bringing up one of his cars to replace my current vehicle, El Güerito.  He’s been my Toto, the Robin to my Batman, the pills to my alcohol for the past 6 years.  I’m coming to terms with it.  He’s going to be gone soon.  Out of my life.  It actually really saddens me.

It’s an inanimate object.  He has no feelings.  He can’t talk back.  He’s my companion.  Everywhere I go across this perpetually changing city, Güerito is there for me.

I’ve spent about an iPad and a half’s amount of money on fixing him since mid-December.  That’s too much.  I could be surfing the web with ridiculous ease right now, but I’m not.  I’m paying for this car not to overheat, for it not to stall, for it to even get out of first gear.  It has broken down too often…

A time for lists:

5.  Partaking of a certain substance in the Threadgill’s parking lot before eating there for the first time with my freshman roommate, and Corona (that’s a dude’s name).

4. The drive to Palestine, Texas with my girlfriend at the time.  I hit speeds of over 110mph in that thing, and I have the ticket to prove it.  I was so proud I showed it to my dad.

3. Driving up and down South Lamar with no money, depressed but needing somewhere to be.

1. Driving you during my first driving test and failing because I couldn’t parellel park well enough. Damn, you had a big ass.